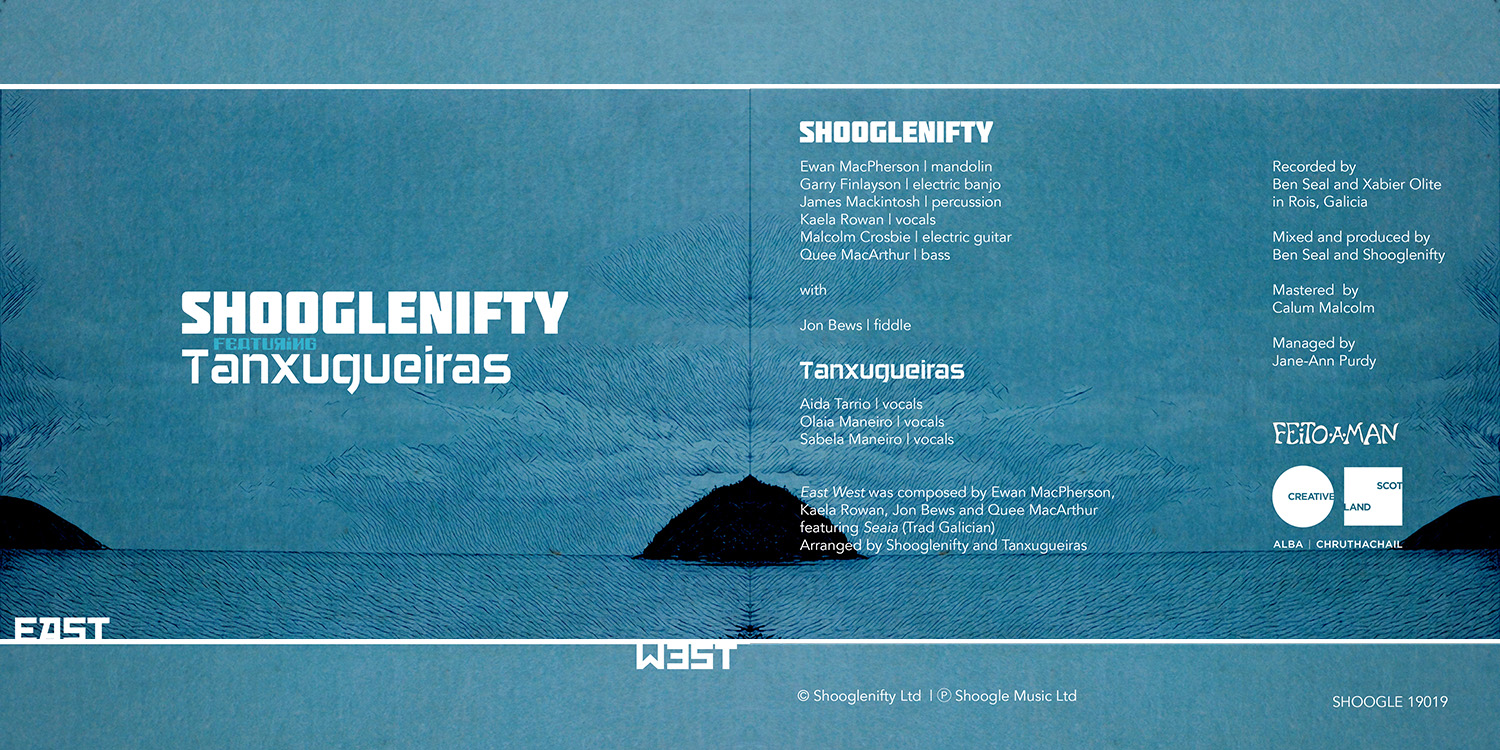 In 2019, as we celebrate the 30th anniversary of one infamous wall being torn down, we live in hope that history will teach, even those who generally refuse to listen, that dividing walls exist only to be ultimately overcome by a collective spirit way stronger than bricks and mortar.

East West is a brand new song by Shooglenifty that celebrates values of solidarity, respect, friendship and humanity that we are much in need of in 2019. This original composition by the band is fused with a traditional Galician love song brought to the recording studio by Tanxugueiras. Seaia is named after the tiny coastal village in Galicia where it was collected.

In August 2017, the Shoogles were invited to Santiago de Compostela by local impresario and long-time friend Vitor Belho to play at the Feito A Man Festival (literally the ‘Handmade Festival’). Unbeknown to the band, Vitor had made a promise our late fiddle player Angus some 18 months previously that he would bring Shooglenifty back to Galicia. The band’s connection with this ‘home away from home’ goes back to the 1990s, spans many tours, and sparked many friendships. It also inspired two of Angus’s most famous tunes, 250 To Vigo and Nordal Rumba. 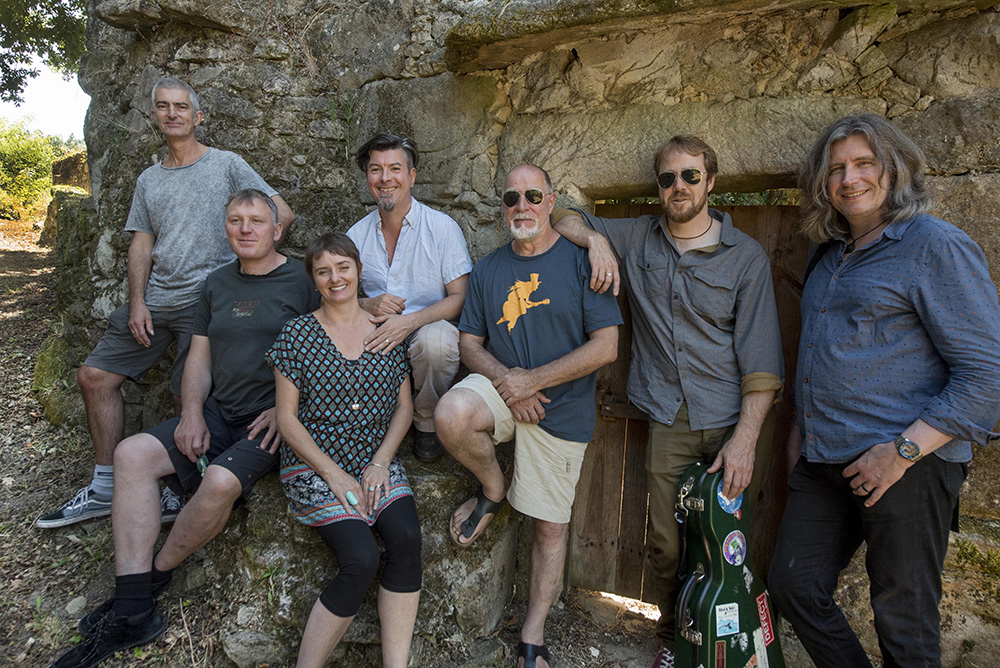 The band had no regular fiddle player at the time, but Jon Bews, an amazing fiddle player from Edinburgh, agreed to come to Santiago de Compostela with us.

Meeting Aida, Olaia and Sabela from Tanxugueiras when they played with Banda das Crechas at Shooglenifty’s tribute to Angus at Celtic Connections earlier in 2017 was an inspirational moment amongst the emotional reminiscences that night. The Shoogles, and indeed the audience, were blown away by the sheer energy and incredible power of these three young voices.

Once we knew that Shooglenifty would play at Feito A Man, we looked for a way to record with Tanxugueiras while we were in Galicia. Xabier Olite of Banda das Crechas offered his studio in the gorgeous village of Rois, a short drive from Santiago and we were all set. 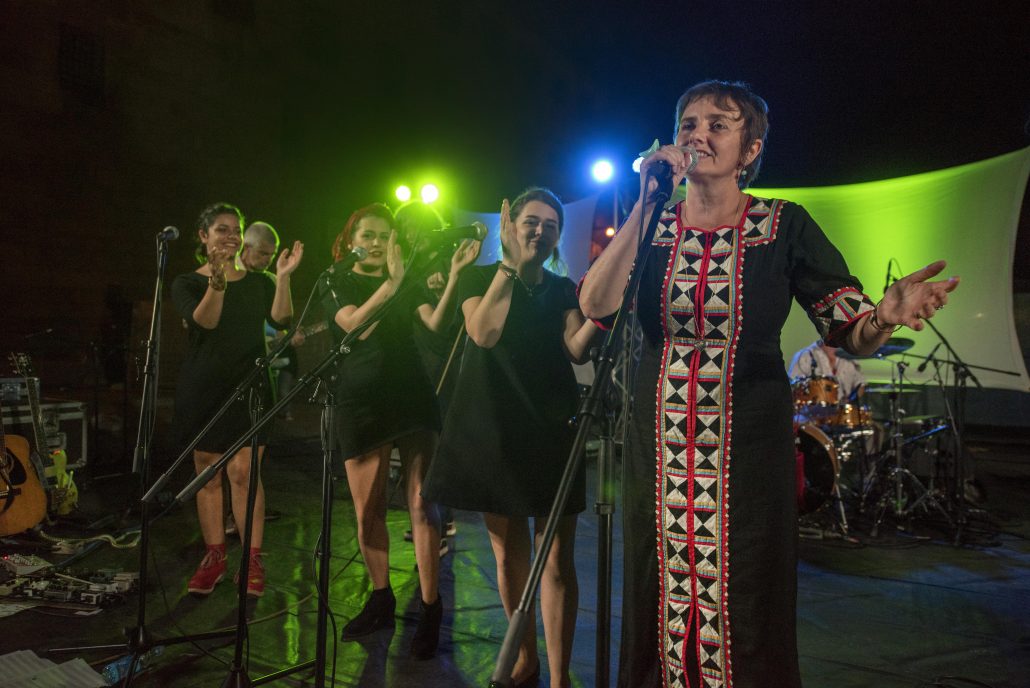 The new song’s live debut was warmly received by the band’s Galican fans at Feito A Man, and East West has been wowing audiences ever since. The Shoogles were reunited with Tanxugueiras in August 2018 when both bands performed for the closing of the European Championships in Glasgow, and will be back together at Glasgow Barrowlands for Celtic Connections on Friday 25 January 2019. The single will be released for download and streaming on the same day.

Get your tickets for Shooglenifty with Tanxugueiras at  Celtic Connections here >>

Recorded by
Ben Seal and Xabier Olite in Rois, Galicia.

Mixed and produced by
Ben Seal and Shooglenifty

This single was made with the assistance of Creative Scotland, the Feito A Man Festival and Cosima Von Saros.

Many thanks to Vitor Belho for enduring friendship, unbelievable hospitality and his invaluable contribution to this recording.

Angi Porto and Noa Díaz and all at Feito A Man Festival, Santiago de Compostela.

Manuel Amigo and all the guys from Banda das Crechas.

Antonio and all the staff at Casa das Crechas, and all at Dezaseis Restaurant, Santiago de Compostela

Rajasthani review for Written in Water
Scroll to top