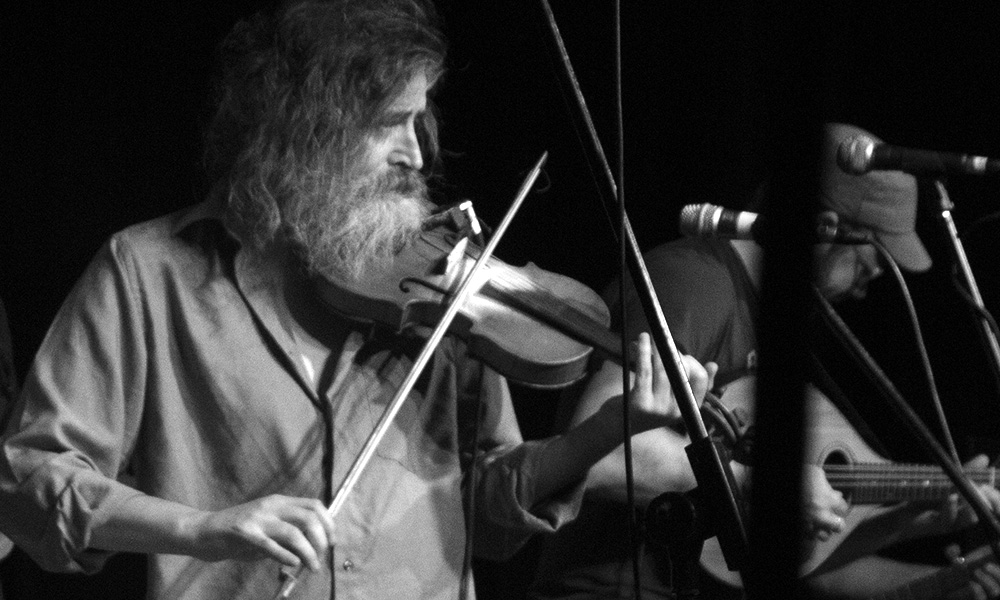 One of Angus’s former pupils, Deirdre Armstrong, offers her own appreciation of his rather individual teaching style …

Angus has been a magnificent figure in my life. I joined a fiddle class at the Edinburgh Adult Learning Project years ago in the 90s and in walked Angus. He took us off on a fantastic, glorious, unusual journey that will never stop …

What a privilege to be in that class.

He was a man of few words but what he said remained imprinted on my memory: teaching gems; a few words which summed up the history behind a tune; brief advice; cryptic jokes.

We were moved and mesmerised by his playing and laughed so much in his classes. Inspired, we longed for that tone, that power, that beauty.  We listened, practised and strived as he led us deeper into the music. Over the months in one of his mixed instrument classes the mandolin player, tin whistle players and guitarists abandoned their instruments and started playing the fiddle!

He would play a slow air for us to learn and we choked back tears; all the west coast Gaelic heritage was there and we could feel it. West Highland music shone through everything – he built on his roots from learning at home and was so open to music from around the globe. “A good tune is a good tune whether it’s from Kyle or Kiev” he would say.

Shooglenifty really got going about that time and I listened in Christie’s Bar, danced madly to them when they moved to La Belle Angele and other Cowgate clubs, and I’ve tried to catch every gig within reach ever since. More recently I would occasionally hear Angus in sessions in Edinburgh, courteous and encouraging to younger players whom he helped to blossom.

There is now a hole in my life and in the lives of so many. But alongside the sadness I am very grateful to have learned so much from him.

I love those meandering and hypnotic tunes like Nordal Rumba, exciting rants like Delighted, dancey quirky ones like Venus in Tweeds and Crabbit Shona. We were always compelled to dance as soon as the band got going.

‘No one is going out of here without the rhythm’ he would say in the class. ‘If you’ve got a problem with the notes go back to the rhythm and you’ll get it’. And the rhythm was all about dancing and like the pied piper he could make us all dance!

As Roy in our fiddle class said “Shooglenifty should be on the NHS!” We came out of every gig glowing, euphoric, exhilarated and in love with the world. The band’s magic never failed. They all gave it everything whether there were ten people or a totally packed festival.

Angus was the best ambassador for Scottish culture without trying – infectious dance rhythms and hilarious intros to tunes said it all.

I respected the way he lived outside the system – he never got incorporated. What a generous free spirit!

The High Road to Who Knows Where
Scroll to top