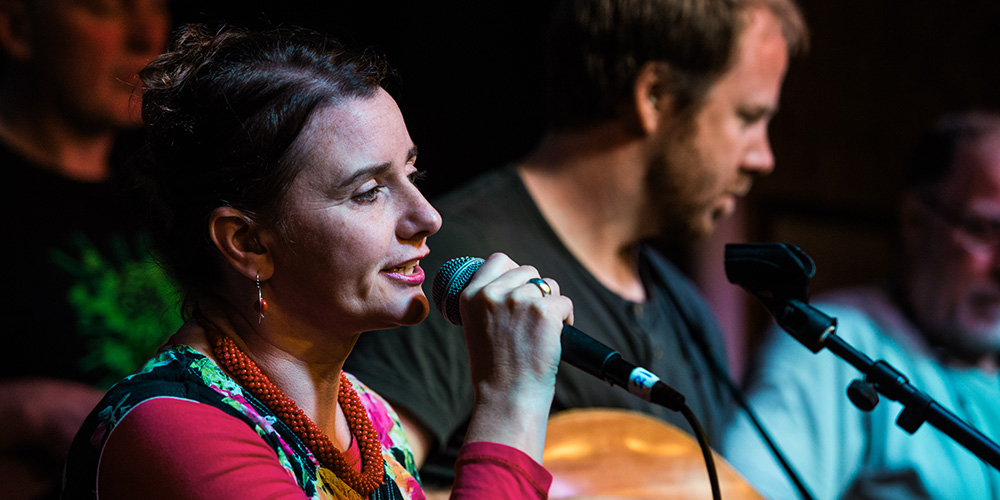 The band are heading out on tour soon – see all dates here – and we’re bringing our new secret weapon with us – ‘puirt à beul’ vocalist Kaela Rowan.

Kaela’s been delighting audiences from Borneo to Brittany, Comrie to Cambridge this year already and we’re sure you’re going to love her.

But you may wonder, what exactly is ‘puirt à beul’? Literally it means ‘music of the mouth’ and has probably more in common with adding another instrument to the mix than a singer. Native to Scotland, Ireland, Cape Breton and Nova Scotia it is often used to dance to. Some believe it derives from a time when instruments such as bagpipes were banned, and there is some evidence that this happened in Scotland after the Jacobite rising in 1745.

Because the voice is used like a fiddle or pipes the rhythm and sounds are more important than the lyrics which can often be non-sensical. Kaela, who grew up in Lochaber, first heard puirt (pronounced “purscht”) at local dances, ceilidhs and sessions, and she was taught her first bit of mouth music at school.

“I loved the rhythm of it,” she remembers. “It’s quite hypnotic and fun too as often the songs are playful.” Kaela has listened to quite a lot of old recordings of puirt where the singers often had an incredible sense of rhythm. “Their voices were more like instruments and at times sounded like gravel and sand rubbed together. I particularly liked this kind of voice, because it didn’t matter that they didn’t have sweet singing voices, what mattered was the beat, and I particularly loved that they’d use their voices with such gusto.”

It’s no surprise then that mouth music goes so well with Shooglenifty’s dynamic sense of rhythm and rough edged groove. Kaela brings an added top layer of melody, more like adding another fiddle or a set of pipes. “I guess it’s like adding another dimension to the tune playing,” she says.

So if you forget for a moment that any words in the puirt originated as Gaelic, it is pretty easy to join in with the sounds and the rhythm of most of the songs on our new album The Untied Knot. Kaela recommends starting with Mile Marbhaisg Air A’Ghaol (1,000 Curses on Love), the vocal element on the title track. Work with the rhythm first, and don’t be afraid to learn the sounds phoenetically.

Strictly speaking, Mile Marbhaisg Air A’Ghaol  is a ‘waulking’ song which was sung by people stretching tweed, whereas, in general, puirt tunes are made for dancing, having fun – just like a Shoogle gig.

Finally, we asked Kaela for her favourite Shoogle puirt. “That changes by the day,” she says. “But for something gentle and cheerful I’m loving Ruidhleadh Mo Nighean Donn/Am Buachaille Dubh Fionnghal (My Brown Haired Girl Would Dance a Reel/Fiona’s Dark Haired Shepherd) at the moment. A pretty laid back set of tunes that really make me happy.”

Download The Untied Knot here. Shooglenifty will be on tour in Scotland and England from 6 November 2015. Get more details.

Shooglenifty: the interview
Scroll to top