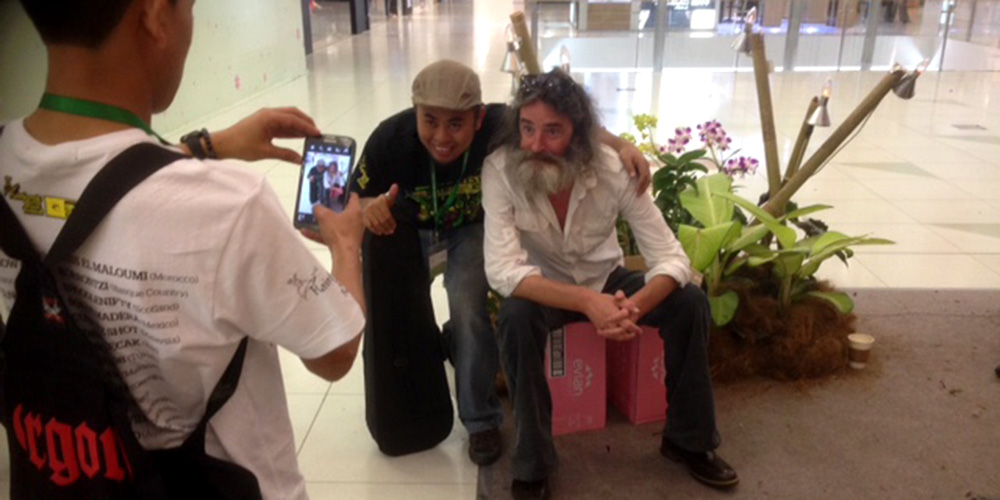 This time next week (7/8/15) the Shoogles will be enjoying their fourth trip to the Rainforest World Music Festival (RWMF) in Borneo. This is a music festival, that, as the name suggests, happens in the jungle. It’s hot, sweaty and full of amazing sounds – musical and otherwise.

Festival Director Jun-Lin Yeoh remembers that the band was first invited to the Malaysian event via the British Council in 1999, “The were such a hit that we had to have them back again two years later. Then we had them for the festival’s 10th anniversary, and now we’re having them back to celebrate their 25th anniversary.”

Unsurprisingly the band are relishing the opportunity to entertain in the Rainforest once again, and new band member Ewan MacPherson is particularly keen to visit the orangutans that are native to Borneo. “Hopefully he won’t get lost like Conrad [Ivitsky] did on one of those first trips,” says James Mackintosh.

Erstwhile Shoogle bass player Conrad is a keen hiker and decided to head off into the jungle late in the afternoon. “In Borneo, it gets dark just like that, and when night fell he couldn’t see an inch in front of his face. There was a search party sent out and he was found at 9pm. He said it was the most terrifying two hours of his life, he had a load of unknown and unseen creatures crawling up him.”

For current bass player Quee MacArthur his encounter with wildlife was in more familiar surroundings. “We were on stage,” remembers James. “The place was going mental and Quee started really moving and jerking around, and I thought, he’s really getting into it tonight. Then I saw him motioning to our sound engineer Craig on the monitor desk. The next thing I saw was Craig grabbing something on Quee’s neck and throwing it into the forest. A praying mantis had landed on his bass and then moved on to his neck where its tiny claws were digging into his skin!”

So you get the picture. The main stage at RWMF is not called the ‘Jungle Stage’ for nothing. The backdrop is the rainforest, and the audience are housed in a natural amphitheatre. “It’s a big gig,” says James. “There are about 10,000 people all going nuts.” And why does he think that Shooglenifty’s music is so popular with the Borneo audience? “Simple really, they like an upbeat tune, and they love to dance like everyone else.”

Jun Lin Yeoh is in no doubt: “the Rainforest audience loved them the first year they came. They all looked mighty fierce and badass, but were really gentle giants, and their music rocked.” For those of us used to midgies, that sounds a bit like the wildlife.

The Rainforest Music Festival is held each August in Sarawak, Borneo. Shooglenifty will headline the festival’s Jungle Stage for the fourth time on Friday 7 August 2015.

The Untied Knot – the latest in an illustrious cover art career for John ...

Download a tour poster and win tickets
Scroll to top