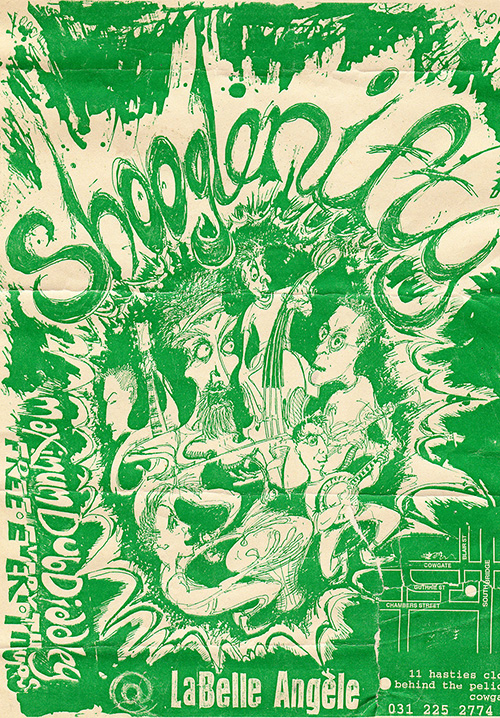 No body can put an exact date to the day that Shooglenifty was born. The year, however, is not in doubt. In 1990 Angus R Grant, a rebellious highland fiddler, Malcolm Crosbie, a guitarist who got his start in a semi-glam New Wave combo, and James Mackintosh, a drummer with groove going spare went busking in Spain. The trio experimented with the traditional tunes Angus had known since knee-high to a fiddle stand, and twisted them into the germ of something new and exciting. When they returned to Edinburgh they added banjo, bass and mandolin to the mix and that germ began to grow. The band rehearsed like mad, and played in pubs around the city until Martin Coull, the manager of the newest club in town, La Belle Angele asked them if they’d like to play his joint.

“The first gig at La Belle was six punters and an electric bar fire,” remembers Malcolm. “It was the middle of winter and we just huddled round the centre of the floor.” It was perhaps an inauspicious start, but having great faith in the band, Martin turned this one off gig into a residency, the Shoogles built their audience, and by the end of the year it was an essential weekly event for progressive folkies and energetic dance fans alike. Check out the poster above, a remnant from that time, by original Shoogle bass player Conrad Ivitsky Molleson.

It would not be unfair to say that the Shoogle sound evolved in La Belle, and many of the band’s early fans have fond memories of that time. The residency led to the band’s first album, Venus in Tweeds, and the launching of the Shoogles onto the international scene. Since then Shooglenifty has entertained audiences from a few hundred in highland village halls to tens of thousands in festival fields. Back home in Edinburgh La Belle Angele became one of the city’s hippest haunts, but sadly burned to the ground in the fire of 2002.

Fast forward to 2015, and La Belle Angele lives again in its original location of Hasties Close, just off the Cowgate, (after a very long wait it finally reopened in November 2014). Shooglenifty is celebrating 25 years and where better to have the biggest, banging party to celebrate that milestone, but the club that launched them on their way.

Shooglenifty’s 25th Anniversary Party and CD Launch is at La Belle Angele on Saturday 16 May 2015 at 11pm. Get your tickets here!

The beginner's guide to 25 years of Shooglenifty

Check out our summer festival preview
Scroll to top