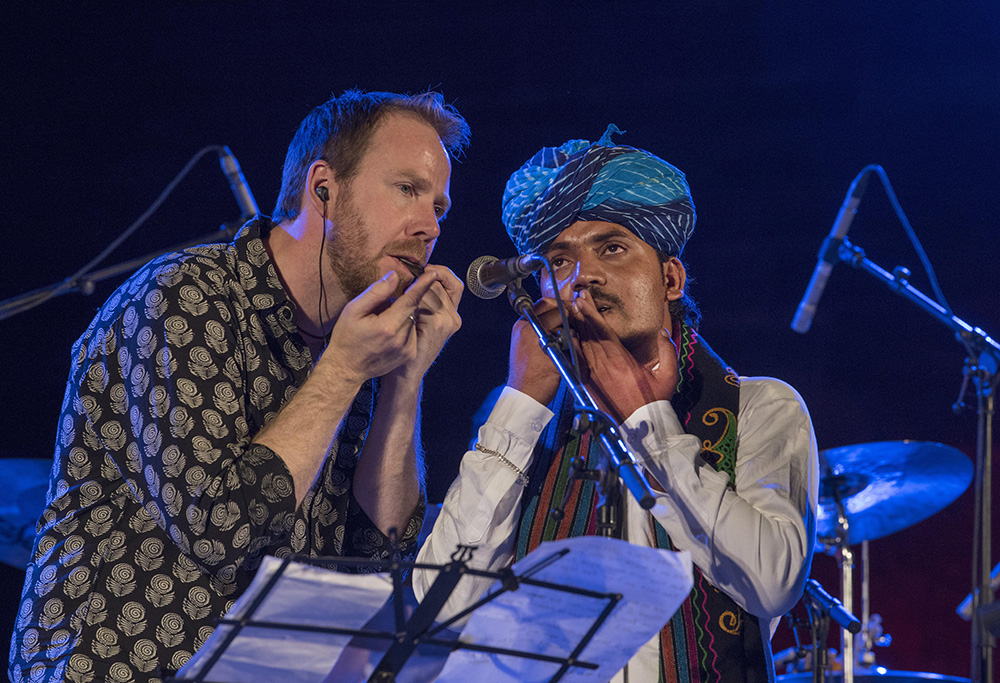 In 2012, I played a showcase gig with Kaela Rowan and James Mackintosh at Celtic Connections. After the show we met some representatives from a festival in Rajasthan who had missed our gig, but wanted to hear Kaela’s music. They invited us to go and play a few songs back at their hotel. I couldn’t make it as I had to go to play another gig. As luck would have it Kaela and James went and played for them and were surprised and delighted to be invited out to play at Jodhpur Riff in October 2012. I couldn’t go…

I went round to visit them after they got back and they were bursting with excitement about their trip. I was handed spice mixes and tried pickles they had brought back. They showed me some exotic new rugs on the wall and some stunning photos of north India.

A year later they were invited back, but this time they took myself and Patsy Reid too. After three extraordinary days meeting, playing music and drinking delicious sweet chai with some of the most incredible musicians from the Thar desert we walked on the main stage to perform a brand new collaboration.

The Jodhpur Riff stage is located in the main courtyard of a 500 year old Rajput fort. It’s called Merangarh (or sun fort ) and it sits 400 feet above the blue city of Jodhpur, on the hill of the birds. It was there under the full moon, with the local maharajah in the front row,  that we played one of the most extraordinary concerts I’ve ever been lucky enough to take part in.

Rajahstani folk musicians don’t really have the word ‘arrangement’ in their musical vocabulary; they are the most in the moment players I have ever known. They give 100% whether they are in a small rehearsal room in the outskirts of the city or on the main stage in front of 2,000 people. It’s chaos and beauty, bravado and respect, moments of ear splitting madness and extreme calm. We all felt the full effect of their heritage. Our own music felt square and regulated, whilst theirs was wild, free, rough, bright and bold. These people are giant musicians and we were very much awestruck by their musical mastery.

We learned a few of their tunes and songs (they sing in their local language Marwari). We tried to teach them some of our tunes and songs. And we discussed a variety of ways to collaborate without being able to play each other’s music, whilst understanding the underlying soul and intention. We watched in amazement as they argued and laughed about which uncountable, super complicated break should happen here, which alap should go there and who should call the tehai. It was organised chaos: beautiful, magical days, full of humour and learning. And there were moments of sober realisation about what we were actually doing.

We walked on stage with a rough collection of Gaelic songs, Scottish tunes and some Marwari song names written on our set list, not really knowing what was going to happen.

We needn’t have worried, I usually get a little nervous before gigs, but despite everything, travel, heat and trying to get our heads around this new music, it was one of the most gently powerful, beautiful and moving gigs. We felt so calm, almost meditative and in the moment with our new friends.

The next year we went back with Shooglenifty and did it all over again … and again the next year. In 2015, over a few beers in a rooftop restaurant, appropriately called Nirvana, we decided to record an album in Jodhpur with a group of eight of these amazing Marwari musicians. By this point they had organised themselves into a band going by the name of Dhun Dhora, meaning literally ‘music of the dunes’.

We had planned to go to Rajasthan in 2016, but then our esteemed compadre Angus Grant fell ill and plans were put on hold. We looked at ways to record the album in Scotland, but before the wheels could be put in motion we lost Angus, pretty much at the exact time we would have been back in India with Shooglenifty for a third year.

Unsuprisingly everything was upside down for a while, but slowly we came to the realisation that we had to go back and finish what we had started with Angus. There had been loss on the Rajasthan side too, one of our new friends, an amazing man called Roshan Khan, who played a mean dholak, died in a car accident a few months after Angus.

So, in October 2017 we found ourselves once again back in Rajasthan about to record an album which had taken on a whole new meaning. We had some amazing days recording in the royal guest rooms in the fort and staying within its awe-inspiring walls.

The recording wasn’t without its difficulties, however. The heat damaged instruments, some of the band fell ill and weren’t available to record all the time, and there were computer crashes. When we had finished the last day, we were not sure what kind of an album we had in the can. It was only when we got it back home to the studio that we would know how everything was hanging together.

Last week we were in Fife finally making a start on mixing the album at Ben Seal’s studio. It took many days of work to get this recording in some shape, but what a shape it is! Working on the music has brought back a lot of amazing memories for all of us and the album is starting to sound bloody great. Even Angus and Roshan make their presence felt.

The result is something we couldn’t even imagine three years ago. And I can’t wait to share it with you.

Huge thanks go to Divya, Namrata, Govind, Sharon, Jane-Ann and everyone who made this possible.

Fingers crossed we’ve a few gigs in England and Scotland with our Rajasthani friends over the summer and there will be a documentary too following on. What a journey!

We have a few more days to raise funds to pay for the manufacturing of the album. Pre-order your copy here

Shooglenifty and Dhun Dhora – Written in Water
Scroll to top